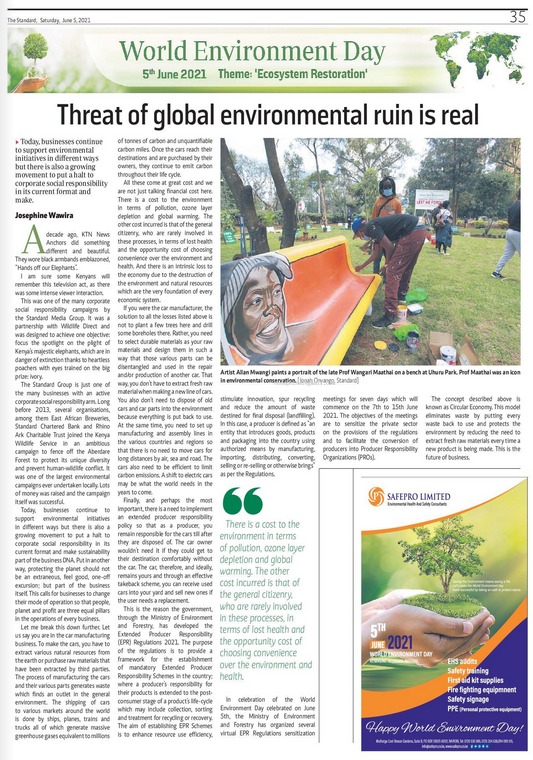 Sometime in 2013, KTN News Anchors did something different and beautiful. They wore black armbands emblazoned, “Hands off our Elephants”. I am sure some Kenyans will remember this television act, as there was some intense viewer interaction.

This was one of the many corporate social responsibility campaigns by the Standard Media Group. It was a partnership with Wildlife Direct and was designed to achieve one objective: focus the spotlight on the plight of Kenya’s majestic elephants, which are in danger of extinction thanks to heartless poachers with eyes trained on the big prize: ivory.

The Standard Group is just one of the many businesses with an active corporate social responsibility arm. Long before 2013, several organisations, among them East African Breweries, Standard Chartered Bank, and Rhino Ark Charitable Trust joined the Kenya Wildlife Service in an ambitious campaign to fence off the Aberdare Forest to protect its unique diversity and prevent human-wildlife conflict. It was one of the largest environmental campaigns ever undertaken locally. Lots of money was raised and the campaign itself was successful.

Today, businesses continue to support environmental initiatives in different ways but there is also a growing movement to put a halt to corporate social responsibility in its current format and make sustainability part of the business DNA. Put in another way, protecting the planet should not be extraneous, feel good, one off excursion; but part of the business itself. This calls for businesses to change their mode of operation so that people, planet, and profit are three equal pillars in the operations of every business.

Let me break this down further. Let us say you are in the car manufacturing business. To make the cars, you have to extract various natural resources from the earth or purchase raw materials that have been extracted by third parties. The process of manufacturing the cars and their various parts generates waste which finds an outlet in the general environment. The shipping of cars to various markets around the world is done by ships, planes, trains, and trucks all of which generate massive greenhouse gases equivalent to millions of tonnes of carbon and unquantifiable carbon miles. Once the cars reach their destinations and are purchased by their individual owners, they continue to emit carbon throughout their life cycle.

All these come at great cost and we are not just talking financial cost here. There is a cost to the environment in terms of pollution, ozone layer depletion, and global warming. The other cost incurred is that of the general citizenry, who are rarely involved in these processes, in terms of lost health and the opportunity cost of choosing convenience over the environment and health. And there is an intrinsic loss to the economy due to the destruction of the environment and natural resources which are the very foundation of every economic system.

If you were the car manufacturer, the solution to all the losses listed above is not to plant a few trees here and drill some boreholes there. Rather, you need to select durable materials as your raw materials and design them in such a way that those various parts can be disentangled and used in the repair and/or production of another car. That way, you don’t have to extract fresh raw material when making a new line of cars. You also don’t need to dispose of old cars and car parts into the environment because everything is put back to use. At the same time, you need to set up manufacturing and assembly lines in the various countries and regions so that there is no need to move cars for long distances by air, sea, and road. The cars also need to be efficient to limit carbon emissions. In fact, a shift to electric cars may be what the world needs in the years to come.

Finally, and perhaps the most important, there is a need to implement an extended producer responsibility policy so that as a producer, you remain responsible for the cars till after they are disposed of. The car owner wouldn’t need it if they could get to their destination comfortably without the car. The car, therefore, and ideally, remains yours and through an effective takeback scheme, you can receive used cars into your yard and sell new ones if the user needs a replacement.

This is the reason the government, through the Ministry of Environment and Forestry, has developed the Extended Producer Responsibility (EPR) Regulations 2021. The purpose of the regulations is to provide a framework for the establishment of mandatory Extended Producer Responsibility Schemes in the country; where a producer’s responsibility for their products is extended to the post-consumer stage of a product’s life-cycle which may include collection, sorting and treatment for recycling or recovery. The aim of establishing EPR Schemes is to enhance resource use efficiency, stimulate innovation, spur recycling and reduce the amount of waste destined for final disposal (landfilling). In this case, a producer is defined as “an entity that introduces goods, products and packaging into the country using authorized means by manufacturing, importing, distributing, converting, selling or re-selling or otherwise brings” as per the Regulations.

In celebration of the World Environment Day celebrated on June 5th, the Ministry of Environment and Forestry has organized several virtual EPR Regulations sensitization meetings for seven days which will commence on the 7th to 15th June 2021. The objectives of the meetings are to sensitize the private sector on the provisions of the regulations; and to facilitate the conversion of producers into Producer Responsibility Organizations (PROs).

The concept described above is known as Circular Economy. This model eliminates waste by putting every waste back to use and protects the environment by reducing the need to extract fresh raw materials every time a new product is being made. This is the future of business.