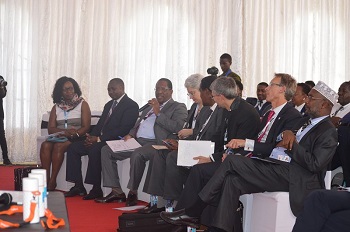 The session was officially opened by the Cabinet Secretary, Environment & Forestry Hon.  Keriako Tobiko who highlighted the government’s commitment and political will to end the plastic waste menace in the country. He referenced successes of the recent ban on plastic carrier bags which has contributed to the reduction in plastic waste that ends up into our water bodies.  He mentioned the government’s collaboration with KAM to allow them to establish a takeback scheme as an example of recent collaborative framework with industry and the private sector to find sustainable solutions to other plastic waste in the market. Hon. Tobiko further stated that the session presented an opportunity to exchange ideas, experiences, knowledge on how other countries have dealt with this menace as it is a global problem.  He concluded by calling for a prompt action to address the plastic litter problem.

Sharing the global perspectives on plastics, Ms. Isabelle Berard  Assistant Deputy Minister of Environment & Climate Change Canada (ECCC) spoke about the Oceans Plastics Charter, which Kenya is a signatory to.  The charter encourages countries, states and corporations to take commit to take action toward a resource-efficient lifecycle management approach to plastics in the economy by: Sustainable design, production and after-use markets, Collection, management and other systems and infrastructure, Sustainable lifestyles and education, Research, innovation and new technologies and Coastal and shoreline action. She emphasised on the need for countries and corporations to sign to this charter and take action.

Mr. Iain Shuker of the World Bank highlighted what the bank is doing to tackle the plastic menace across the world. He said that the Bank uses tools such; investments, partnerships and playing a convening role to address the plastic waste menace around the world.  They have a strong presence in East Asia where the problem is greater.

The Regional Director IUCN ESARO- International Union for Conservation of Nature (IUCN), Mr. Luther Bois Anukur also mentioned what his organisation was doing to tackle the plastic waste menace especially in regard to data collection and dissemination.  IUCN has developed a plastic footprint tool that can help businesses and countries measure their plastic footprint and begin to increase positive impact.

Some of the questions that stood out are on alternatives to PET and what we are doing on the actual clean up.  It was clear from the panel that there are no cheaper alternatives to PET yet, but governments can increase incentives into research on cheap alternatives and also incentives consumers and manufacturers to reduce, reuse and recycle.  There’s also need to create value out of this waste, thus transforming it from trash to cash.

Mr.  Merijn Tinga of the Plastic Soup Surfer share knowledge from the Netherlands in a thrilling presentation in which he highlighted the benefits of working with all stakeholders, especially politicians, consumers and manufacturers.  to get the world rid of this problem. Two years ago the Plastic Soup Surfer kite-boarded across the North Sea to England on a surfboard made from littered plastic bottles. This record attempt was the start to a petition that called out for deposits on small plastic bottles in the Netherlands. He collected 60,000 signatures and, when handing them over in Dutch Parliament, he surprised the politicians with a self-written resolution and had them all sign it. This resolution was adopted two days later. The so called ‘plastic soup surfer resolution’ would become the basis of the new policy that aims to have deposits on small plastic bottles by 2021.

Some of the interventions that can be made to achieve outcomes include:

Individuals can also take part by: