Electronic waste a threat to health and the environment 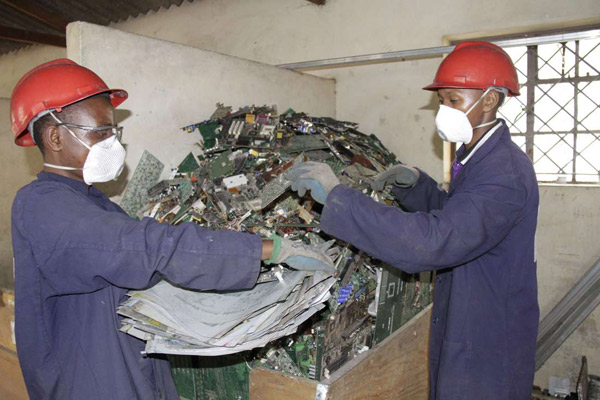 Joseph Mulama rummages through a pile of used printer cartridges stored in a corner of his Smart Tech Cybercafé, on Tom Mboya Street in Nairobi, wondering how to get rid of them.

The dusty and bulky cartridges that Mulama has accumulated over the years have now become unsightly trash, taking up valuable space, gathering dust and even housing pests.

His printers cannot use refilled cartridges, so he has to buy new ones to replace those that are used up. But Mulama’s greatest worry is not having to buy new cartridges but how to dispose of the spent ones before they fill the entire room.

But while many people like Mulama, who handle such used electronic items worry only about the sheer volumes and space they take up, even more worrying is the danger they pose to the environment, apart from accumulating dust and housing pests.

Besides, as Kenya, like many other developing countries, becomes more dependent on technology, more such waste will be generated, aggravating the problem of electronic waste disposal and its disastrous effects on the environment.

Many electronic gadgets, including cell phones, computers, televisions, HiFi systems, refrigerators, and a host of other electronic appliances are manufactured using a variety of harmful substances including lead, hexavalent chromium, phthalates and brominated flame retardants.

Yet these substances are so critical to the devices that they cannot function without them. Lead, for instance, is effective as a solder while flame retardants keep computers from bursting into flames as we type. But for all their usefulness, they come with serious health implications.

Mr Godfrey Odhiambo, who runs Cupid Electronics, a laptop repair shop on Moi Avenue in Nairobi’s central business district, recalls that he used to experience a lot of chest congestion and suffer stomachaches when he started the business in 2007.

Mr Odhiambo who receives quite a number dead computers from clients, says he sells the computer motherboards — after removing certain useful components — to a group of Chinese businessmen for Sh600 a kilo, and the plastic components to garbage collectors who truck them to the Dandora dumpsite.

“Handling these laptops is very complex because when you inhale the chemicals in them or you don’t wash your hands properly after handling them, your chest gets congested or your stomach gets upset,” he says.

Mr Odhiambo’s sentiments lend credence to a study conducted in one of the largest e-waste dismantling areas in China, published in May 2011 in the Environmental Research Letters, a science journal, which found out that people exposed to e-waste fumes and chemicals suffered inflammation and oxidative stress – which resulted in cardiovascular diseases, DNA damage and cancer.

Mr Samwel Matonda, a chemist and the director of the Kenya Association of Manufacturers, warns that some of the discarded electronic gadgets have radioactive elements that are hazardous to the environment and health.
Disposal options

“The heavy metals or chemicals can cause diseases such as cancers and skin irritation in people who get into contact with them. Also, the chemicals can leak into rivers whose waters are used for irrigation, posing further challenges,” says Mr Matonda.

So what options do developing countries like Kenya, which lack proper waste management regulations, have?

One option that some people have already taken is informal e-waste recycling. Those involved in the trade collect the gadgets, separate the plastic, motherboards, batteries and copper wire for sale and then burn those that are of no value to them. But there are concerns that such primitive recycling techniques of burning the materials such as cables to extract copper expose those involved to toxic fumes, which can lead to respiratory illnesses.

Kakamega Governor Wilbur Ottichilo says that the importation of electronic equipment into the country has increased by 100 per cent in the last 20 years and is worried by the lack of laws and policies governing e-waste disposal.

“As a country we should minimise waste production by recycling what we use and ensure that anything we use can be recycled. If we keep our environment clean, we can reduce 50 per cent of disease,” Mr Ottichilo told DN2 during the United Nations Environment Assembly conference held in Nairobi in December last year.

Notably, Singapore, an advanced country whose citizens are expected to be high consumers of electronics and, therefore, a high source of e-waste, ha considerably smaller amount of e-waste winding up in its disposal facilities.

The country has an active recycling and second-hand market, while it also emphasise recycling. Besides, the government has guidelines to help companies recycle their e-waste.

Yet in Kenya, the e-waste draft Bill of 2013 has been stuck in Parliament for more than five years, which makes one wonder why the government isn’t interested in legislating policies to tackle the fast ticking e-waste time bomb.

A research conducted in  2014 by the United Nations Environment Programme titled Solving the E-waste Problem” indicated that Kenya generates more than 44,000 tonnes of e-waste annually, with experts noting that irresponsible disposal of electronics has contributed significantly to environmental degradation and an increase in poor health among citizens.

In 2009, the Kenyan government instituted a 25 per cent excise duty on all imported refurbished computers and zero-rated new computers to curb possible dumping to minimize dumping of second-hand computers but there hasn’t been a significant outcome in controlling the e-waste menace.

As the sheer volume of waste and the challenges of managing a steadily growing stream of e-waste remain daunting, a fast emerging solar energy industry is another sector that poses a huge threat to the already monumental challenge of e-waste disposal.

The International Renewable Energy Agency (Irena) estimates that there will be a surge in solar panel disposal in the early 2030s, and that by 2050, there will be 60 to 78 million cumulative tonnes of photovoltaic panel waste globally.

Whereas most individuals like Mulama might be still not be sure of how to dispose of their used electronics, choosing to keep them instead of throwing them out, the fact is that they will only do so for a certain amount of time before they toss them into the environment.

Then there are irresponsible companies that auction their electronic waste to backstreet recyclers who pick only a few components then tossthe rest into the environment.

Around the world, 30 to 50 million tonnes of electronic devices are thrown away every year but the volumes of e-waste are expected to rise as electronic companies continue to introduce newer and more advanced gadgets.

Larteck Africa CEO Lamarck Oyath notes that it is time Kenya began conducting life cycle assessment of electronics before allowing them into the country. “Some of these toxic chemicals result in biodiversity loss. There is so much life lost in the soil by disposing of toxic substance into the soil,” says engineer Oyath, adding the country urgently needs a comprehensive recycling system and ICT policies to support the establishment of e-waste plants.

Mr Justin Labby, the managing director of Enviroserve East Africa, is also in the business of collecting and recycling e-waste. His company began operating in June 2017 and shipped 10 tonnes of e-waste to Dubai three months later.

“Our ultimate aim is to get all e-waste materials out of landfills and into factories where they can be recycled,” Mr Labby says, adding that what they cannot handle is shipped to Dubai for recycling.

“We are currently targeting the cooperate sector but as we develop, we will move to individual consumers,” he said.

We handle 200 tonnes of e-waste, which is less than 1 per cent of the e-waste generated in Kenya.

Lead is highly toxic to humans. It affects the liver, kidneys, reproductive system, and nervous system and can cause permanent problems, especially to the brain

Hexavalent chromium is known to cause cancer. It also affects the respiratory system, kidneys, liver, skin and eyes.

Phthalates are industrial chemicals that can damage the liver, kidneys, lungs, and reproductive system.

25
The percentage of excise duty on all imported refurbished computers and zero-rated new computers introduced by the government in 2009.

Mr David Ong’are, the director of compliance and enforcement at the National Environment Management Agency (Nema), notes that the agency has so far licensed only three facilities in the country to undertake e-waste management.

He said two of the them deal with dismantling of the e-waste to get what can be recycled before exporting the components that cannot be recycled to countries like Belgium, Japan and Germany, which have the capacity to manage the waste.

“The adverse impacts posed by poor management of e-waste are real. In 2013, Nema developed the E-waste Management Regulations to enhance compliance and enforcement of e-waste in the country. The regulation has extended responsibility to producers to bear the cost of recycling of the products commonly known as extended producer responsibility. This Regulation is at the Ministry of Environment and Natural Resources level awaiting gazettement,”explained Mr Ong’are

Waste Electrical and Electronic Equipment (WEEE) is one of the few registered companies dealing with e-waste recycling.

Mr Boniface Mbithi, the firm’s managing director, says the company was established out of necessity in 2007 after the schools they supplied with desktop computers began having trouble getting rid of those they no longer needed.

“We had been distributing computers to schools since 2003 but realised the schools had nowhere to take the outdated machines so we began collecting and recycling them. In 2007, we opened our doors and began collecting e-waste from other companies,” he said, adding that they now take electronic waste from banks, embassies, government offices and companies for a fee but offer the service for free to individuals and households.

Mr Mbithi said that individual households can dispose of their waste through the WEEE centre website by filling a form, after which the company sends a truck to collect the waste.

He told DN2 that the most of the e-waste they receive comprises information communication technology (ICT) equipment and solar products.

“Solar products are slowly becoming a disaster,” he said, adding that they have set up collection points at Safaricom outlets, where individuals can dispose of their used electronic items.

Once the waste is taken to the WEEE centre, the plastic bits are removed, shredded, and sold to companies that use them to make plastic poles while the rest is shipped to Belgium.

-BY LEOPOLD OBI in the Daily Nation